Why Does My Dog Keep Throwing Up?

A vomiting dog is always a cause for great concern in pet owners.  If your dog is vomiting, one of the first things to determine is if it actually is vomiting.  Vomiting is a complex process that forcefully expels the stomach contents from the body. When a dogvomits there is often a preceding phase of nausea.  Nausea can show signs such as drooling, licking surfaces, or less interest in food. After nausea is retching which is when your dog shows active abdominal contractions.  Often their whole body will seem to rock up and down as their abdomen moves in and out. Almost always retching is followed by actual vomiting of stomach contents. 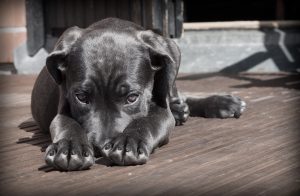 When vomit may not be “vomit.”

Two things that can look like vomiting are regurgitation and gagging/coughing.  These often have different causes and therefore can have different levels of concern.  Regurgitation is when food seems to just “fall” from a dog’s mouth without much effort.  Certain problems where the food does not even reach the stomach can cause regurgitation such as a weak or blocked esophagus.  These are usually seriousissues and should be addressed quickly.

Coughing/gagging dogs will usually show their chest and ribs expand and contract just like we do when we cough.  This can sometimes be confused for the abdominal contractions in vomiting. What is more confusing is dogs can cough up some white foamy (or even pink-ish) fluid.  An important way to determine coughing from vomiting is noting if the movement you are seeing is coming more from the chest vs the abdomen. This can be difficult to determine at times so also look for signs of nausea which are often not present when a cough is the main issue.  A problem with a cough can be minor such as an upper respiratory infection, or an irritant in the air. It can also be more serious such as congestive heart failure or pneumonia. When in doubt, call your veterinarian.

When is vomiting a serious concern?

Vomiting can be caused by simply eating something that disagrees with your dog.  Many dogs of course are more than willing to taste and swallow things first and think about it later.  If its a non-toxic food that just disagreed with your dog, vomiting once or twice may not be a concern.  Vomiting is always a concern when it happens for no reason, especially on an empty stomach, or if the vomiting prevents your dog from keeping any food and water down.  Likewise vomit that contains blood, or is continuous or unproductive is a cause for concern.

Like we said, vomiting can be due to simply eating something that disagrees with your dog.  However much more serious causes also exist. A foreign object obstructing the intestines can be life-threatening and often shows serious vomiting.  A twisted stomach (commonly known as “bloat” or GDV) shows repeated unproductive retching (so retching without any actual vomitus or substance produced).  Advanced metabolic diseases such as a diabetic crisis, Addisonian crisis or acute kidney failure may show vomiting. Heat stroke, severe gastrointestinal infections and shock can also cause vomiting.  Determining the cause is a matter of careful understanding of the whole history of the patient and thorough diagnostics.

What are the consequences of vomiting?

Regardless of the cause, vomiting can result in significant dehydration and electrolyte losses, especially if it occurs in conjunction with diarrhea.  Eventually these could lead to weakness, cardiovascular collapse and be life-threatening. Depending on the underlying cause there could be other consequences to the illness such as sepsis, gastrointestinal perforation, and organ failure.  In many cases, dehydration is the first major consequence and this can begin to set-in in as little as a few hours or so. The one even more urgent exception is the unproductive retching associated with bloat or GDV. This can become critical in as little as 1-2 hours.

The important message is that the causes of vomiting and various, and many can be serious.  When there is more than one or two episodes of vomiting, and/or if this is combined with not eating or drinking, weakness, or diarrhea, it is important to contact your veterinarian (or a local veterinary emergency hospital) as soon as possible.  Many times swift intervention can result in simple treatments yielding rapid resolution.